I had very good luck with students most years-- I would develop a bond with them quickly, and they rarely were outright defiant or indignant over doing a task. However, there were a few things that, no matter how well I got along with the kids or how much they liked my class, led to an argument (at least in the beginning of the year--but more on that later). One of those was presentations. 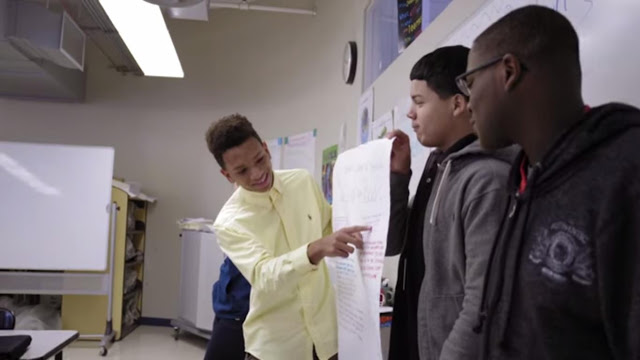 I don’t think any assigned task created as much instant dread as presentations, and so they were often the hardest part of a SOLE. If students are unused to presenting, they are nervous and often extremely resistant. Even if they’re not, most are uncomfortable with presenting something they have created in one hour. They push back, and often the initial presentations are less than stellar. Some teachers, when they’re new to SOLE, might question why we do this--when students are so excited to do the research and collaboration, why force them to present if they’re uncomfortable?

My first (and to me, most important) answer to that is: SOLEs help them get comfortable with presenting. Having worked at MC2 STEM, presentations were an expectation, but they were often in front of much larger groups than just one class. On the smaller scale, students might present to a few professionals--on the larger, students had to perform in front of an auditorium full of people. Obviously, expecting students to just have the skills to do this without practice is impractical, but presentations were often long projects, and not every class had the time to devote to them. Enter SOLE, where a presentation took only one hour. Students week after week presenting, interacting, taking questions, occasionally having mishaps and learning to work through them, and doing all of that consistently. In a few short weeks, students no longer were complaining. In a few more, their presentation skills skyrocketed. There was no more shuffling, laughing, shyly reading off a paper, etc. And the really good news was that they became so comfortable presenting in front of their class that presenting in front of other people was no longer a task worthy of sheer terror. Sure, they got nervous, but it wasn’t so seemingly far-fetched. Not to mention, with practice students got excited to present-- they wanted to share their information in new and creative ways, and so presentations became more and more engaging.

In addition, being able to present is a life-long skill--I can’t think of any industries where you never need to present. When I was in college working at a Dollar General, I still had to prepare a safety presentation to give to our staff. For my senior thesis, I had to pitch my idea to a board of professors in my department. More and more, presenting is reaching into every industry--According to Forbes.com, 70% of Americans agree that presentation skills are critical to their success at work. However, in that same article, they cite that 20% say they’ll do anything to get out of a presentation, including feigning illness, even if it means “losing respect” in the workplace.

What this says to me is that we need to prepare students for this. If they’re comfortable presenting, they’re already one step ahead of those who aren’t. They might resist at first-- this article shows us that even adults will-- but in the long run, it’s so beneficial to them that we can’t ignore this vital step in SOLEs. Practice makes perfect, after all.

Popular posts from this blog

A Teacher's Role in SOLE

December 10, 2017
In my experience, a teacher’s biggest concern about SOLE is that they don’t understand their part of it. And it’s true: SOLEs are very student-driven, and teachers often take a step back. Several times when teachers watched me facilitate a SOLE in my own classroom, they asked: “But...what do you do?” In my classroom, where the expectations for SOLE were laid out and students were very used to the process, there were long stretches of time where I was walking around and appeared to do nothing. This is intentional! In reality, I was taking a step back--monitoring, but letting students succeed without me. However, there’s a huge difference between “taking a step back” and “leaving the school and driving home.” A SOLE can’t function without a teacher-- the teacher might just be in a little different role than normal.

Students are still students and need guidance. That begins with your big question. Your big question can be generated by students, but obviously, they are vetted by teachers…
Read more

SOLE: The Importance of Reflection

October 23, 2017
If you read these blogs regularly, you probably know by now that not every SOLE goes perfectly. To some, they assume that means that SOLE is ineffective, and they are no longer interested in using it. However, I’d argue that nothing goes right 100% of the time, and honestly if something does it’s probably not truly challenging your students. In addition, I’d challenge them to think about anything in life that goes well 100% of the time. I’ve made my mom’s recipe for brownies probably a hundred times in my lifetime, but that didn’t stop me from forgetting to add flour once. Failure is a part of life-- it’s what we do with failure that matters.

But what do we do with failure? Typically, we don’t sit around and bemoan it (at least not for very long). The key thing to do is figure out what happened, and the easiest way to do that is a simple reflection. Walking through your steps, wondering what happened, trying to pin down exactly what went wrong. As teachers, it’s usually pretty easy t…
Read more

What makes a good Big Question

August 23, 2017
Big Questions can be make or break for a SOLE. A good question that students want to answer means that students will be excited and engaged. It basically removes the need to manage groups, because kids genuinely want to know the answer. However, that means the opposite is also true-- a bad question can mean kids are bored, uninterested, and basically makes a teacher’s day miserable. Luckily, it’s not too hard to come up with a really great question-- it just takes some reflection, and usually some input from your students.

A big question needs to be open ended. If your question has a simple answer, students will figure it out in two minutes, plan their presentation, and then need to be managed for the majority of your class. Students need to be able to find multiple perspectives, to argue with each other, to come to a conclusion on their own. Anything simpler, and it’s an intro question, not a SOLE. A big question needs to be interesting. Tying questions into a student’s interests is …
Read more